Nurses in Illinois who sued the hospital system they work for over its COVID-19 vaccine requirement have been granted a temporary restraining order by a judge until the injunction requested by the nurses is considered.

The healthcare workers argue that they have a right to decline the novel vaccine under the state’s Health Care Right of Conscience Act.

“Today’s ruling marks an important step toward victory for these nurses – and it sends a signal to all Americans about the importance of fighting for your rights,” said Liberty Justice Center attorney Daniel Suhr, who is representing the nurses, according to Just the News.

“Employers and government officials should take note that forcing people to violate their conscience not only is wrong, it’s illegal. No one should be forced to choose between keeping their job and sacrificing their beliefs,” he stated.

Neelie Panozzo, Amy Memenga, and four other unnamed nurses were told by the hospital system that they would be terminated at the end of the month if they do not receive the COVID-19 vaccine.

The workers had applied for exemptions, but they were denied.

Healthcare workers across the country who object to COVID-19 mandates have pursued similar action to block vaccine mandates by either private employers or their respective state.

Firefighters, police officers, and other public workers are also objecting en masse. As many as half of Chicago police officers could soon be forced on leave if they do not comply with the city’s vaccination requirement; in New York City this week, as many as 5,000 city workers took to the Brooklyn Bridge to march against Mayor Bill de Blasio’s mandate. 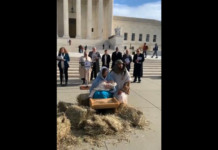