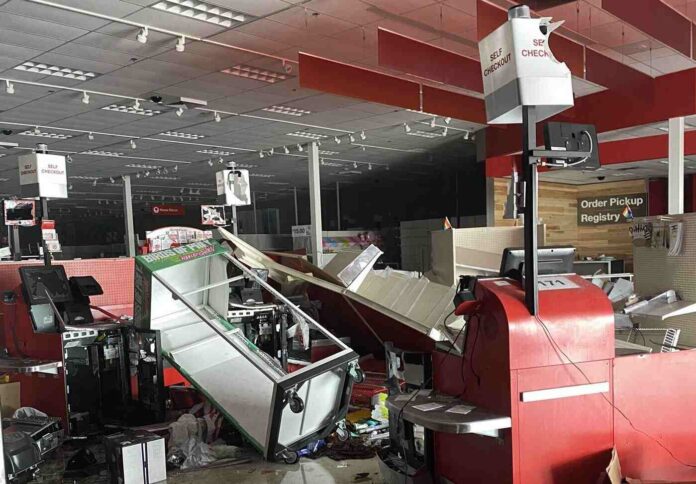 Target has announced plans to reopen its South Minneapolis store with an added emphasis on appealing to Black shoppers in particular, some of which may be the very same individuals who looted and ransacked the store during riots sparking from George Floyd’s death back in May.

According to a Bloomberg report, the store now boasts more spices requested by the local community, the lighting surrounding the store was made brighter, and a “more inviting” mural and plants were placed at the entrance of the store.

Because that’s how we fight racism, apparently, with spices and a mural.

For good measure, Target had the store completely remodeled by a contracting company owned by a Somali-American woman and also plans to stock more products made by black-owned brands.

Just in case, though, they’ve added shutters to the store in the event that their efforts to appease rioters fail and they get looted again.

…even though a remodel in 2018 fixed earlier perceptions the store was dirty, poorly stocked and a bit of an afterthought, some White residents in the Longfellow neighborhood would still drive to a different Target instead, derogatorily referring to the location — and its customers — as “Tar-ghetto.”

So the roughly $80 billion corporation did something it hadn’t before: met with Black residents, employees and community organizers (over Zoom; it’s 2020 after all) to ask what they wanted to see in the reconstructed store.

Target hired a contracting company owned by a Somali-American woman and built some of those neighborhood requests into its blueprints. It also added shutters to the store that can come down in case of future emergencies.

Back in August, Bloomberg goes on, Target’s new “racial justice committee” determined that the best course of action after being looted during a riot was to dismantle its reputation of appealing primarily to White shoppers.

“Target is not going to be able to end systemic racism,” said Stephanie Creary, a committee member and professor at the University of Pennsylvania’s Wharton School. “Target is going to be able to reduce the impact of racism that is created from its operations. That’s what we’re looking at.”

“We’re really thinking about this relevant experience that is overtly Black and reflecting overtly Black needs and culture,” said chief external engagement officer Laysha Ward, adding that the changes would be implemented in Target stores across the country.

In South Minneapolis, Bloomberg concludes, Target will be one of few fully operational stores in the neighborhood. Other local grocery stores including an Aldi, were temporarily closed after the riots reduced much of the neighborhood to rubble. Another local supermarket, Cub Foods, continued operations from under a tent. The police precinct remains empty and the post office is still little more than a pile of rubble after being burned to the ground during “protests.”