Twitter is a safe space for leftists.  A place where they are free to use their First Amendment right to express their opinions and feelings in the most violent and abhorrent ways imaginable.

This was exemplified in a highly disturbing way recently when apro-abortion activist gave her stamp of approval on a video depicting violence against a pro-life woman.  Her tweet received 50,000 likes, making it evident how radical the left has truly become.

The user, called @cheleblush, posted the tweet as a response to the Alabama abortion bill.  The year-old video, which went viral when it was originally posted online, depicts a female pro-life activist who was violently kicked by a pro-choice man in Toronto.

Here’s your war on women.

Fortunately, Hunt was arrested and charged on eight counts of assault.  Predictably, Hunt has a history of violence against women and activists.

“I still stand by this king,” was the caption along with the video posted by the Twitter user.  Her followers were thrilled, and posted supportive messages in response.

How can anybody watch this video and not become instantly nauseous?  The fact that a woman can sit there and promote this kind of deplorable behavior and also glorify the perpetrator is sick.

Conservative, liberal, libertarian, socialist, Klingon; it doesn’t matter what group you identify with.  If you think this kind of violence is acceptable, you are WRONG.

“I hope he’s doing okay, f*** ur abortion ban,” she went on to say in a classy follow-up tweet. 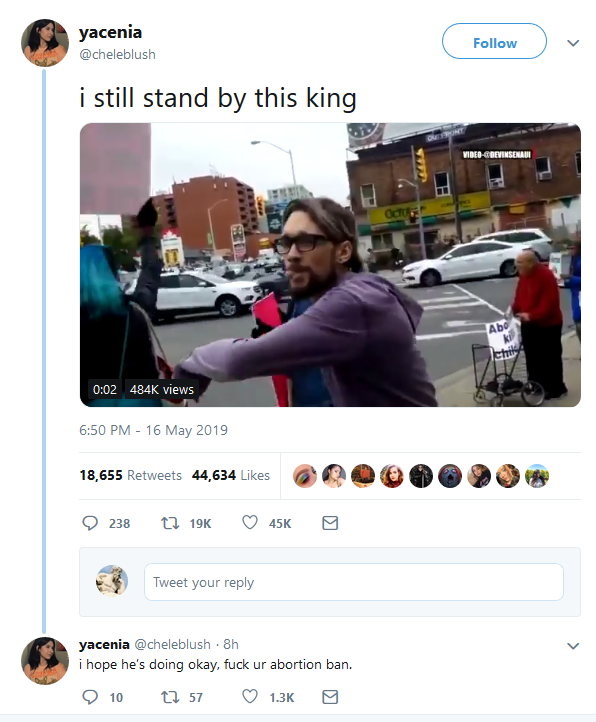 This tweet is the latest example of the larger problems growing in the political landscape of America: the endorsement of political violence and the unfair censorship of conservatives on social media platforms (and the double standards that dictate it).

This tweet unapologetically endorses violence in the name of politics against anyone who does not agree with the murder of babies.  Celebrating and promoting violence against opponents has become a growing trend on the left. Unhinged celebrities have been calling for violence against conservative politicians since Trump was elected without consequence.

It also exposes the left’s lack of actual concern for women.  The glaring hypocrisy of physically attacking a person for not “supporting a woman’s right to autonomy of her body” seems so obvious yet clearly missed by many.

Double standards seem to be the norm in America.  Conservatives are being shut down and banned left and right from social media platforms.  The reasons are not usually given, but the posts made by these “‘nefarious” right-wingers are typically cordial and appropriate.  They just happen to express an opinion different from the leftist propaganda that is permitted.

Here we have a woman essentially calling for violence against pro-life advocates and not only is she not banned from Twitter but her post is not removed AND it has received 50,000 likes from like-minded lefties.  If this doesn’t scare you, it should.

Contact your congressmen and senators and insist they keep the pressure on Big Tech companies like Twitter and Facebook.  Leftists are being radicalized through social media and there is nobody censoring it.  If we do not keep insisting for First Amendment equality for all political groups, we will surely continue to lose it.