When it comes to “family planning,” it seems like Planned Parenthood is the only organization that gets any attention. Ironically, PP’s only plan is to murder unplanned, unborn babies despite the fact that they claim to offer adoption referrals. The organization is definitely not short on cash donations from major corporations, not to mention the hundreds of millions they get in government subsidies. Just when it seems like all of corporate America is immoral and corrupt, however, we are given a reason to have hope.

Wendy’s and its partner, the Dave Thomas Foundation for Adoption, have kicked off a fundraising campaign to bring more attention to adoption. The Dave Thomas Foundation is an advocacy group with the goal of helping place children who are typically facing difficulty being adopted in loving homes. The Foundation’s program, “Wendy’s Wonderful Kids,” aims to help kids who are older, have special needs, or are part of a sibling group through evidence-based, child-centered methods.

According to Live Action News, “The Foundation is now seeking to go nationwide and has partnered with SnapChat through the Cause Cup program. Starting in May, the Cause Cups at participating Wendy’s will have a Snapcode that, when scanned, will donate $5 to the Dave Thomas Foundation for Adoption – for a total of up to $500,000. The donations will help bring the program to all 50 states and DC by 2028.”

Wendy’s CEO Rita Soronen spoke with Columbus Monthly about the goal of the program, explaining that when it comes to placing children in adoptive homes, “At the core is knowing that child.” She discussed how caseworkers simply do not have the time to devote to one child at a time. She went on to explain, “When you give a caseworker time to really work a case, you will find an adoptive family for these children.”

These children are deemed “unwanted” by the left and abortion proponents. They would never have had the opportunity to exist had their birth mothers not chosen life for their children. The left would rather have you believe these precious children were better off dead.

Dave Thomas himself was an adoptee, and, judging from his life’s work, it’s evident the cause of adoption has always been close to his heart. Through his success in business, he was able to pursue philanthropic ventures. He has visited the White House several times to raise awareness about adoption, and in 1990, he was invited by George H.W. Bush to be the spokesman for a national adoption awareness campaign. In 1992, he founded the Dave Thomas Foundation for Adoption.

We applaud the late Dave Thomas and his legacy of life! What a beautiful and much-needed cause in this culture of death.

If you’re tired of major corporations donating money to abortion, take a lunch break at Wendy’s today and show your support for the pro-life efforts being made by this company! 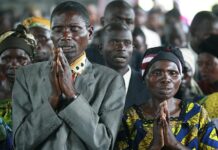 Over 1,400 Christians in Nigeria Slaughtered by Jihadists in First Four Months of 2021

Over 1,400 Christians in Nigeria Slaughtered by Jihadists in First Four Months of 2021